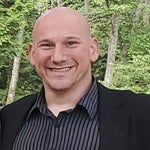 Josh is an associate in the Seattle office. Right out of high school, Josh did what his father had done and his father before him. He became a construction laborer. Josh's construction experience culminated with him running his own construction company.

However, he always planned to go to college. So, after ten years in the trades, Josh returned to school and earned a bachelor's degree in political science at Idaho State University. He also contracted with the Army ROTC program and commissioned in the US Army as a Field Artillery officer. After several years, a combat deployment to Afghanistan, and a few moves around the country, Josh was one of 25 out of about 6500 qualified personnel selected by the Army for their Funded Legal Education Program.

Josh attended law school at the University of Washington, where he dedicated himself to becoming the best litigator he could be. He participated in every mock trial competition offered by the school, and was a member of the Moot Court Honor Board. He interned at a prosecutor's office, externed for a trial judge, externed for a Washington Supreme Court Justice, and was awarded the MacGillivray Scholarship for Excellence in Advocacy.

Upon receiving his JD from the University of Washington, Josh was stationed at Fort Bragg, NC where he served as a legal assistance attorney. He served soldiers and their families by providing legal advice and services on a host of issues, including the Service Member's Civil Relief Act, Family Law, Trusts and Estates, and Consumer Protection. When COVID struck, Josh was reassigned to act as a Fort Bragg COVID-19 Response Team Attorney. In that role, he and his team analyzed and summarized the policy and regulatory guidance that changed on a daily basis throughout the worst of the pandemic.

His team provided timely, accurate, and succinct analysis and advice to the commander of Fort Bragg to enable him to make informed policy decisions.
After ten years of Army service, Josh moved back to Western Washington, where he continued to hone his litigation skills as a criminal defense attorney. He passionately represented hundreds of clients, delivering outstanding results. Now, Josh is thrilled to bring his unique background, perspective, experience, and passion for litigation to our clients at Scheer.Law PLLC.

Outside of work, Josh is a father of five boys, a dog lover, and an avid outdoor enthusiast. He loves Western Washington, and he can often be found with his kids backpacking in the rainforest, hiking in the Cascades, or fishing in the many local lakes and rivers. He also enjoys functional fitness, obstacle course races, and tries to compete in the Bataan Memorial Death March (a 26.2-mile ruck march in the desert mountains of New Mexico to honor and remember WWII Soldiers) every year.