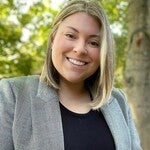 Katharine grew up in Boise, Idaho where she attended Boise State University and received her B.A. in Public Communication. While at BSU she was a member of the Talkin' Broncos where she won two Pi Kappa Delta National Championships.  In 2016 received her Juris Doctorate from Syracuse University College of Law where she served on the Executive Board of the Moot Court Honor Society and was a member of the National Trial Team and Phi Alpha Delta. Katharine also served as an editor for the Journal of Science and Technology.

After law school, Katharine became barred in Idaho and Washington, while working in the construction industry in Seattle. Prior to joining Scheer Law, Katharine worked in New Mexico for Santa Fe County as an Assistant County Attorney where she focused on employment law and policy compliance.

Outside of work, Katharine enjoys supporting the Los Angeles Dodgers, with her husband and two dogs.